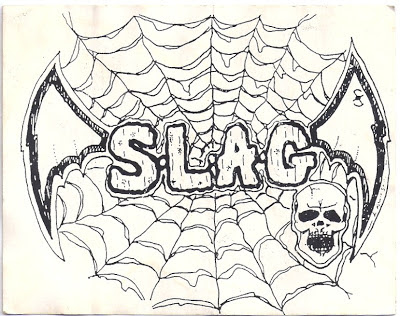 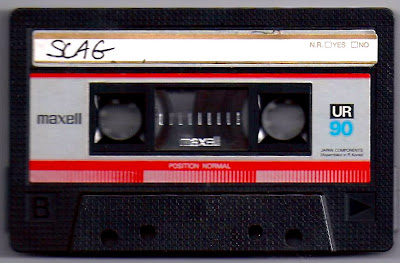 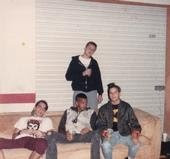 Slag were hardcore punk from Coral Springs Florida from the mid/late 80's. This is a pretty rare little demo and i only have it because the drummer Timmy (Gitlan) Scheoleber is one of my best friends on this planet, and we have been for over 30 years. Back in the early 80's we started our first bands together and jammed in Timmy's garage. We sucked. But we were kids. Timmy was only 12 at the time, i think i was 14. We went by various lame names such as "The Mud Shuttle Band" & "The Never You Mind Band" & later when we thought we were metal "Destroyer". We would steal crap liquor from my Grand Ma's house and go get drunk and play. Anyway, not too soon after we started our Rock N' Roll careers together in the Garbage state of New Jersey, Timmy moved away to Florida. But we stayed in touch and wrote each other via real snail mail.

Fast forward a few years later and i started my own Hardcore band called Social Decay here in NJ and Timmy was in a Hardcore punk band called Slag in Florida. We traded tapes. And here is it some 27 or so years later. I'm pretty sure this was 1985. No later than 1986 and no earlier than 1984... The tape starts out a bit wobbly but hey, this this has been around for longer than most people reading this....

Timmy tells me stories of being completely fucked up on acid and crack and a lot of drinking w/ these miscreants. Punk rock life. The band consisted of Genny Slag on Vocals. Way Cool Jr. Larry on guitar. Black Troy on Bass & Timmy on drums. They played around the Coral Springs area and played with Florida bands like The Belching Penguins & Nuclear Beer and opened for big band s like The Dead Kennedy's, GBH & BGK.

Timmy and I are still friends and we have been jamming ever since he moved back to NJ in the early 90's... Even playing in a band called "Godspeed" that did some cool things like opening for Black Sabbath & Dio on tours in 1994.

I wish i had some more pics but it doesn't seem like any more exist from this time. Bummer. Just this little one you can hardley see....

If anyone is searching for Slag and finds this and has anymore info PLEASE drop it!

I will update with more info as/if i get it!

to whom ever put a copy right infringement on this and took it off the blog can suck a dick.... this is/was my best freinds band and u can eat cocks.....


Mon, Feb 11, 2013 at 5:41 AMFeb 11
Message starred
Notification of copyright infringement
from support@blogger.com to you
Show Details
Blogger has been notified, according to the terms of the Digital Millennium Copyright Act (DMCA), that certain content in your blog is alleged to infringe upon the copyrights of others. As a result, we have reset the post(s) to "draft" status. (A bit of background: if we did not do this, we would be subject to a claim of copyright infringement, regardless of its merits. The DMCA is a United States copyright law that provides guidelines for online service provider liability in case of copyright infringement.)
The URL(s) of the allegedly infringing post(s) may be found at the end of this message. This means your post - and any images, links or other content - is not gone. You may edit the post to remove the content in question and republish, at which point the post in question will be visible to your readers again.
If you believe you have the rights to post the content at issue here, you can file a counter-notification. For more information on our DMCA policy, please see http://www.google.com/dmca.html.
The notice that we received, with any personally identifying information removed, will be posted online by a service called Chilling Effects at http://www.chillingeffects.org. We do this in accordance with the DMCA. You can search for the DMCA notice associated with the removal of your content by going to the Chilling Effects search page at http://www.chillingeffects.org/search.cgi and entering the URL of the blog post that was removed.
If it is brought to our attention that you have republished the post without removing the content in question, then we will delete your post and count it as a violation on your account. Repeated violations to our Terms of Service may result in further remedial action taken against your Blogger account including deleting your blog and/or terminating your account.
If you have legal questions about this notification, you should retain your own legal counsel.

I have a good faith belief that use of the copyrighted materials described above as allegedly infringing is not authorized by the copyright owner, its agent, or the law. [checked]

I swear, under penalty of perjury, that the information in the notification is accurate and that I am the copyright owner or am authorized to act on behalf of the owner of an exclusive right that is allegedly infringed. [checked]