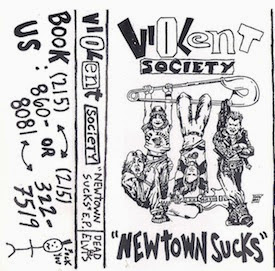 Violent Society - Newtown Sucks
Posted by demo tapes at 8:35 AM

awesome! would it be possible to post the 1988 demo as well?

yeah i will get to that eventually!

i had this tape and lost it many years ago, so thanks! can you find/post the "punktured" (i'm about 97% sure that's the correct name)demo tape that came out around this time, too? that would rule the world, because it's probably been two decades since i heard those songs!