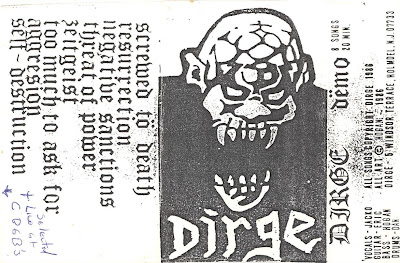 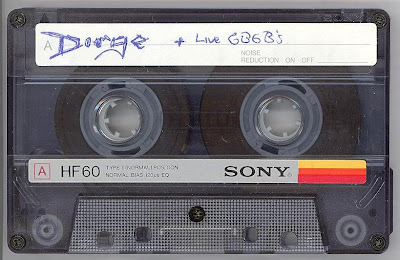 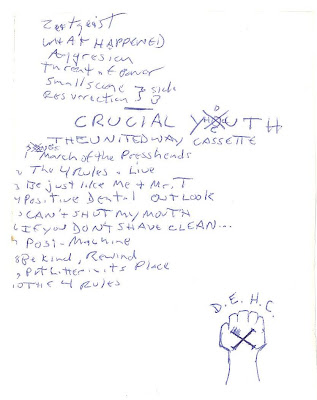 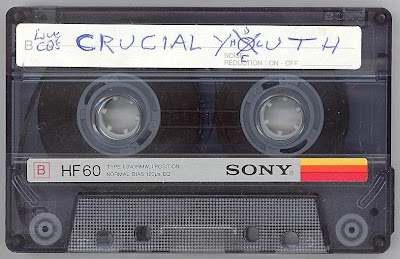 One of my fave and one of the best mid to late 80's Jersey HC bands Dirge.
Singer Jack Monahan better known as simply Jacko was the singer for NJHC/Punk legends Fatal Rage who's LP on Mutha Records is now a sought after collectors item.
check that out Here:

Git man Eric Tucker was a higher class of ax man than the average HC knuckle dragger. Hell, so was bass player Jim Hogan and drummer Danny Gonlin making these guys one of the better acts from the day. But make no bones about it for all its hardcore leanings this is straight up crossover metal. I know Jacko will fight that point to the death but it is true. We shared the stage and hung with these guys a lot back then. Jim Hogan went on to play in Solarrized. Dan Golins played in A Thousand Knives of Fire among others and Guitar Player Eric i heard is out west and is now a Chef.

I'm being lazy but at some point i will download the live Dirge stuff & Crucial Youth stuff that was dubbed on Side B. C.Y. was a goof on straight edge thing that i think Eric played guitar for, at least for a while. I know Gentlemen Jim Norton was also a member and Oh yeah, Eric also played guitar for NJ band FCC. Which stood for Fanous Cheese Cake.... I never understood that band name....???

for now dig into this ripper!

Edit 1/28/11 - Reloaded the files as divshre dumped them and I've added the live at CBGB tracks listed above!!! Enjoy!

I've also added the Crucial Youth United Way Cassette. I put it in there as one file because its sort of messy w/ some live tracks, some TV audio and some demo tracks all going in to one another. If your feeling frisky feel free to break teh tracks down!

Oh Yeah all the songs are listed above!

i think divshare dropped some of the links.... i'm going to have to re-load the files. give me some time. i'm lazy....

you can grab the collection i made (the LP, the 12" ep and the demo) here:

Demo had a clitch! its all worked out and working fine now!!!

In the early 1980's The Red Oak Diner in Hazlet, NJ had a typo on their menu that read, "Try our Fanous Cheesecake" which led to much hilarity when ordering (ie. "I'll have the cheesecake, hold the 'Fanous' "). This diner was a frequent haunt of the FCC / Crucial Youth gang.

One of life's mysteries solved!