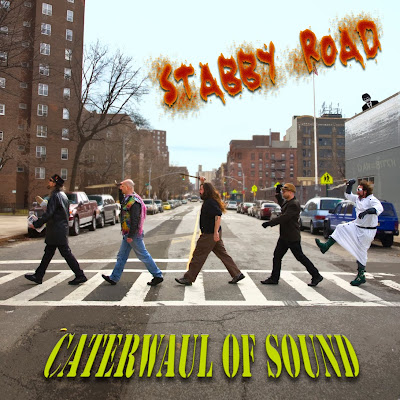 from your pal Nazz Nomad at Bleedin Out. aka rico vanian.

My band Caterwaul Of Sound just released our first album "Stabby Road". It's sorta punk sorta proto punk. Hoping you'll include it on your next blog posting '


CATERWAUL OF SOUND’S new elpee “STABBY ROAD” will make the blind see, the deaf hear and the dead walk the Earth (or something).
Their new album “Stabby Road” (available for free download on iTunes/Amazon and on the band’s website www.caterwaulofsound.com), on April 15; offers 10 slabs of brain dampening gonzo garage rawk.
The band got its start as a labor of lust. Five friends in NYC, with the sole intent of hanging out and blasting out jams of their favorite groups, found some rehearsal space, got a lot of intoxicants and started to make some righteous noise. “All we wanted to do was get hammered and play tunes that we all loved until one of us passed out” testifies bass player Rico Vanian. Starting with the basics (The Stooges, Ramones, MC5, Replacements, AC/DC, etc), the band honed their alleged “skills” and destroyed many monitors and even more brain cells.
Eventually, the pure rock energy could not be harnessed; and the guys honed their unique toonage into... well, a Caterwaul Of Sound! Their first single “(Love Theme to) Kids Go To The Woods, Kids Get Dead” was featured in the cult classic horror film of the same name. Though they were not nominated for an Academy Award for best original song, Caterwaul Of Sound garnered many accolades, as the song has become an underground hit.
Available to play your town, be it club, Bar Mitzvah or ritual sacrifice; Caterwaul Of Sound is guaranteed to rock the roof off your scene.
Caterwaul Of Sound is:
Vox: That Guy Drumz: J-Lo Lead Guitar: Professor Damage Rhythm Guitar: CreepyMo Bass Guitar: Rico Vanian

http://www.caterwaulofsound.com/
Posted by demo tapes at 3:11 AM