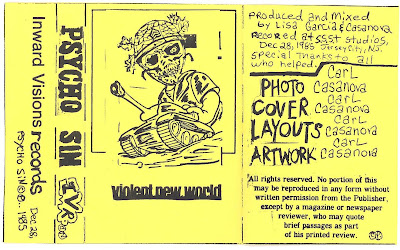 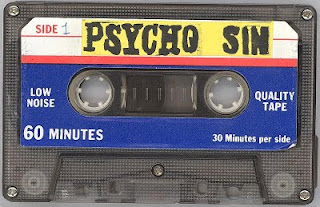 You've all heard of Lo-Fi, well here is some NO-FI. These guys and gal were kings of pissed of, don't give a fuck noise of the highest order! If you weren't there there is no way to fully understand what i am saying! long before industrial bands were in fashion these guys were clanking steel pipes, trashing metal, banging on steel drums, mutilating accordions, and destroying everything in their path! Carl Casanova their lead (singer) was a good friend of mine for years back in the mid 80's and he was way active in the small underground NJHC scene back then, putting on shows at soup kitchens and putting out tape comps and helped out Social Decay a bunch back then. We played a bunch of shows together back then and i probably have about 8 to 10 different Pycho Sins demo's that i hope to get to at some point. I have tons of pics and flyers too, man i need more time to archive all this shit. Not that anyone gives a fucking shit... But here is the Violent New World 1985 Demo. As lo-fi (recorded on boom boxes) and pissed as it gets! I lost the track list to this years ago some some of these titles might be wrong, if you know, tell me so!!!
Also, you MUST get to the end of this demo for the "Filthy Skinhead Comic"
yeah and check this shit out! Psycho Sin myspace!!!!

hello!
Can you reupload it on mediafire?

Seems that divshare has a loop and the download never starts

great blog, can you give an idea what the chances are of finding the psycho sin 12'' or 7'' for sale(ebay, tradelist,salelist, distros, records stores) i would love to score a copy of each someday.
thanks.

good luck rayass. these things are pretty tuff to find even if you live in the area....