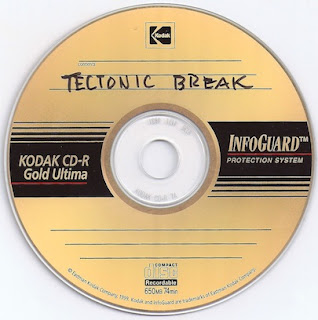 Ok, so i usually do tapes here but i just stumbled upon this little cd-r that i had tucked in a box and had not listened to in years, and man is this good. Not sure if Tectonic Break ever really did anything officially other than a few comps but i was friends w/ the bass player Patric Carlsson, who at the time was also the bass player for Half Man. And he sent this to me way back when. The singer git man Janne Bengtsson was also in Half Man. I've long since lost the song titles so if anyone knows please let me know. After Half man & Tectonic Break Patric and Janne started another band called Skånska Mord. Below is the wiki info on Half Man and Tectonic Break and some info on Skånska Mord i pulled off youtube.

Half Man formed in 1986 in Örkelljunga Sweden but split after two years.[1] The original line-up featured Janne Bengtsson on guitar and vocals, Gunnar Andersson on guitar and vocals, Patric Carlsson on bass, and Mats Nilsson on drums. The band reformed in 1990 with Bengtsson and Carlsson accompanied by guitarist Peter Lilja and drummer Roger Bengtsson.[1] A demo was recorded in 1994 but an album was not recorded until 1998, when the band self-released The Complete Field Guide for Cynics in a limited run of 500.[2] Border Records picked up the album and re-released it in larger quantities. The band released a split 7" with Mothercake in 2000 and appeared on Small Stone Records tribute to Aerosmith, Right in the Nuts. The band released their second and final album in 2002 entitled Red Herring on the Italian label Beard of Stars.

Janne and Patric also had a side project called Tectonic Break featuring Mattias Nilsson and Peter Johansson who released a couple of songs on different compelation albums. Later Janne and Patric started the band Skånska Mord with members of the band Mothercake in 2006. The album Last Supper where released in 2010.

Skånska Mord was founded in 2006 by members from the then-defunct bands Half Man and Mothercake. Janne Bengtsson and Patric Carlsson have been playing together for 16 years in Half Man and before that for even more years in various constellations, pretty much inseparable through both their musical careers. Half Man released two full-length albums - The Complete Field Guide for Cynics (1999) and Red Herring (2002), the first being a self-released private pressing and the second released through the Italian label Beard of Stars. Janne Bengtsson and Patric Carlsson where also in the band Tectonic Break that contributed one track to the Small Stone Records compilation Sucking the 70's 2002.

Half Man and Mothercake shared one split single, aptly titled Half Man vs. Mothercake Vol. 1, in 1999.

The different band members all have at least two things in common. First the fact that they all come from the same place, Örkelljunga, a small village in the south of Sweden. The three older members Janne Bengtsson, Patric Carlsson and Patrik Berglin have been friends since their early teenage years. The second thing in common is the love for old 70's hard and heavy rock. A lot of inspiration has been gathered through the years from Jan Bengtsson's and Patric Carlsson's sizeable collections of vintage vinyl, amongst the rich amounts of hard rock, progressive, blues and psychedelia. In some way this shared musical background have given birth to a special sound which is distinctive as coming from Örkelljunga. Where Half Man played a blues based heavy rock and Mothercake had more metal inclinations it still had that same sound. A sound with one foot firmly planted in the seventies, yet going somewhere fresh and new. Perhaps the music of Skånska Mord sounds something like a blend of both Half Man and Mothercake.

The album, The Last Supper, was recorded during the spring of 2009 by Martin Ekelund and was released by Small Stone Records in Januari of 2010.

According to a review on Hellride, the songs are "Stigmata" and "Maria."